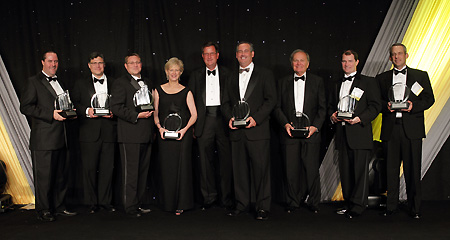 Baltimore, MD—Dr. Leslie Mancuso, President and Chief Executive Officer of the global health non-profit Jhpiego, was named one of Ernst & Young’s 2011 Maryland Entrepreneurs Of The Year®,  a prestigious award presented to only eight business executives, during a gala event in downtown Baltimore Thursday night.

Dr. Mancuso was the only woman executive to receive the coveted honor in ceremonies at the Baltimore Marriott Waterfront Hotel. Under Dr. Mancuso’s leadership, Jhpiego, an affiliate of Johns Hopkins University, has grown from an organization of 125 employees with a $5 million budget to a leader of innovation in global health care with $130 million in revenues and more than 950 employees working in 50 countries. For nearly 40 years and in more than 150 countries, Jhpiego’s mission has remained the same—preventing the needless deaths of women and their families.

“Ernst & Young has honored outstanding entrepreneurs like this year’s winners for the past 25 years,” said Harry Thomasian, Ernst & Young LLP Entrepreneur Of  The Year Maryland Program Director. “These business leaders have accomplished so much and contributed a tremendous amount to the community. They give us hope for what the next 25 years of entrepreneurs will bring.”

An independent judging panel made up of previous winners of the award, leading CEOs, private capital investors and other regional business leaders chose this year’s winners. Dr. Mancuso was named as the Global Entrepreneur Winner.

“It is an honor to be recognized by Ernst & Young for Jhpiego’s groundbreaking work worldwide in maternal and newborn health, caring for women and families, and I am privileged to be included among such an extraordinary group of leaders from Maryland,” said Dr. Mancuso

Dr. Mancuso’s success in advancing Jhpiego’s mission and innovative low-cost solutions to today’s global health challenges has been built on a tireless work ethic. Traveling 80% of her time throughout the developing world, Dr. Mancuso keeps a relentless schedule— working more often than not seven days a week, from early until late. Her focus and commitment have been a key element to growing the organization into the successful, solid institution it is today.

When Dr. Mancuso took over Jhpiego, she discovered within the first year that the organization was not prepared for the future. With zero new revenue on the horizon and current funding scheduled to conclude in 18 months, she knew immediately that disciplined, solid business practices were in order to preserve this organization and its mission, to which she was intensely committed.

But Dr. Mancuso also realized that fresh ideas were important to achieving success—she thinks out of the normal not-for-profit “box.” Dr. Mancuso forged unique, public-private partnerships with businesses and governments and put a strong focus on development of new programs, low-cost health care innovations and technical expertise. She built a diverse, dedicated team with a strong work ethic and promoted robust external relations and communications—areas often overlooked within the industry. Her creative thinking has led to significant success including Jhpiego’s selection as the lead organization for the U.S. government’s global flagship Maternal and Child Health Integrated Program (MCHIP).

Aside from Dr. Mancuso’s tireless commitment to Jhpiego, she still finds time to contribute to the community at large. Serving on various boards such as Goodwill Industries International, U.S. ASEAN Business Council, The World Trade Center Institute and The Health Business Alliance, she chairs committees and makes valuable contributions to each organization.