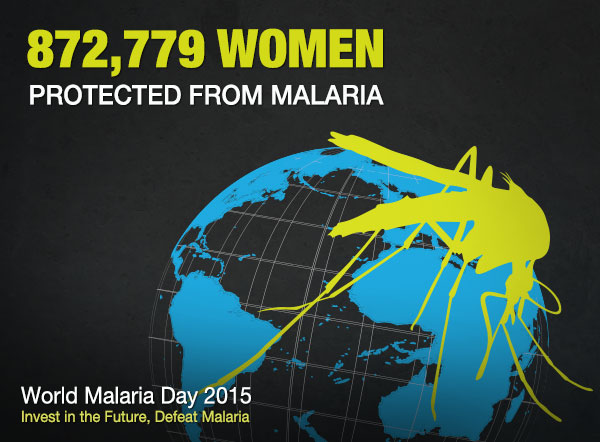 Where women and families live should not determine if they live—this is the philosophy driving Jhpiego’s work in 14 countries to defeat malaria, a disease that impacts millions, primarily in low-income countries. Pregnant women and children under five years old are particularly vulnerable to malaria because of their compromised immune systems. Malaria in pregnancy often contributes to dangerous health consequences for the mother and her unborn baby, including severe maternal anemia, low birth weight and even death. For children under five, malaria remains the leading cause of death in sub-Saharan Africa.

The theme for World Malaria Day 2015 is Invest in the Future, Defeat Malaria. While at face value this might seem like an obvious declaration, in the fight against this relentless killer of more than 584,000 each year, significant investments in improved prevention, diagnosis and treatment can mean the difference between life and death. From public-private partnerships that train health workers in high-risk communities, to increased commitment from countries to strengthen health systems, to buy-in from local communities to protect their citizens, we know these investments work. We have seen firsthand how, with support from donors and partners, countries across Africa and Asia have helped countless women and children survive malaria, and, most important, have prevented many new cases of malaria.

So what do we know works?

For decades, malaria seemed to have the upper hand, but today, we are seeing real progress in ending this 100 percent preventable and treatable disease. Using what we know works and building on investments from stakeholders around the globe, we can finally defeat malaria.

In Cameroon, see how Jhpiego and ExxonMobil are preparing health workers in the community to fight malaria. Read More »

In Burkina Faso, an ambitious project to reduce malaria deaths by 50 percent is going strong with the support of the government.
Learn More »

Jhpiego believes that when women are healthy, families and communities are strong. We won’t rest until all women and their families—no matter where they live—can access the health care they need to pursue happy and productive lives.